There are objects that belong so much to our daily lives that we no longer see them, like those Duralex glasses in the canteen or those blown glass Christmas balls that we hang on the tree every year. Tourists sometimes come from afar to buy these objects, between Proust madeleines and samples of a French way of life.

Some of these creations were born a long time ago and have passed through the ages, such as the blue of Gien, born in 1872, the Laguiole knife, originating from Aveyron, or the Solex bicycle, which will return to service in an electric version in 2022.

Others, also successful, were designed very recently thanks to the flair and enthusiasm of young entrepreneurs, those who launched the “organic” toothbrush Bioseptyl, Le Biberon français or Le Parapluie de Cherbourg.

In these times of pandemic and slowing economy, this return to local know-how, respect for quality and the environment, in French factories, is more than ever on the rise.

Here is a selection of thirty objects from yesterday and today that were dreamed up, designed and manufactured in France. 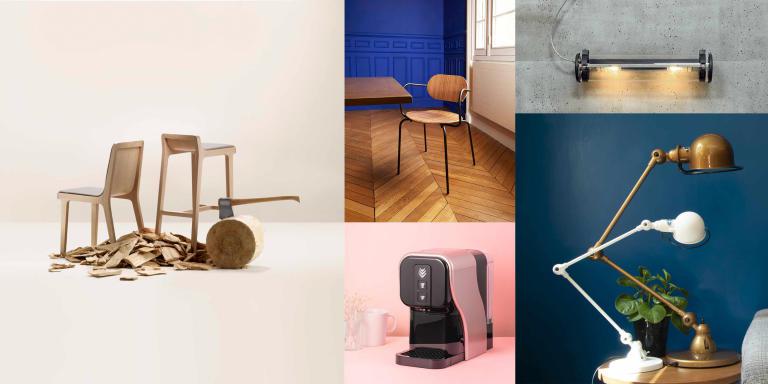 Created in the 15th century to keep an eye on customers in a shop, suspected of having magical powers, it is today a highly sought-after classic of design interiors.

The name of this convex mirror will have varied several times depending on the era. First called a "banker's mirror", to describe its first use as it appeared in northern Europe in the 15th century, it allowed merchants to keep an eye on the customers of a shop or a pharmacy while remaining seated at his desk. The Flemish painters were the first to play with the multiple angles of view of this object which they slipped into their paintings. Jan van Eyck with his painting The Arnolfini Spouses (1434), Petrus Christus with A Goldsmith in his Studio (1449) or even Quentin Metsys with The Lender and his Wife (1514) reveal in the convex mirrors backgrounds full of new characters , thus giving depth to the painted scenes.

But very quickly, this domed mirror was also credited with magical powers and it took on the name of "witch's eye", a superstitious protection for dwellings. Servants in bourgeois interiors dread them because they think they are constantly being spied on. The object thus becomes the ancestor of surveillance cameras. Illuminating dark corners, its light-diffusing side will reinforce the interest of using it in interior decoration and it finds a lasting place there.

Adorned with a gilded metal frame, the convex mirror was given a new name in France in the 1940s, that of “sun mirror”. It was Gilbert Poillerat (1902-1988), a French art decorator and ironworker trained at the Boulle school, who offered him one of his finest variations with the Chaty Vallauris. Made in the Alpes-Maritimes, this mirror became very fashionable in the 1950s and still sold for a very high price in certain auctions for original models.

Nowadays, the curved mirror remains a highly sought-after classic in design interiors, often found in flea markets. By affixing several models on a wall, the different reflections really giving the impression of enlarging the room. It is therefore a mirror… magic! Sentou editions have released a very refined recent reissue that they have also named Endora, named after the invading mother-in-law of the mythical series My beloved witch (250 euros).

Also find our selection of the 50 objects that have revolutionized design.

You have 0% of this article left to read. The following is for subscribers only.